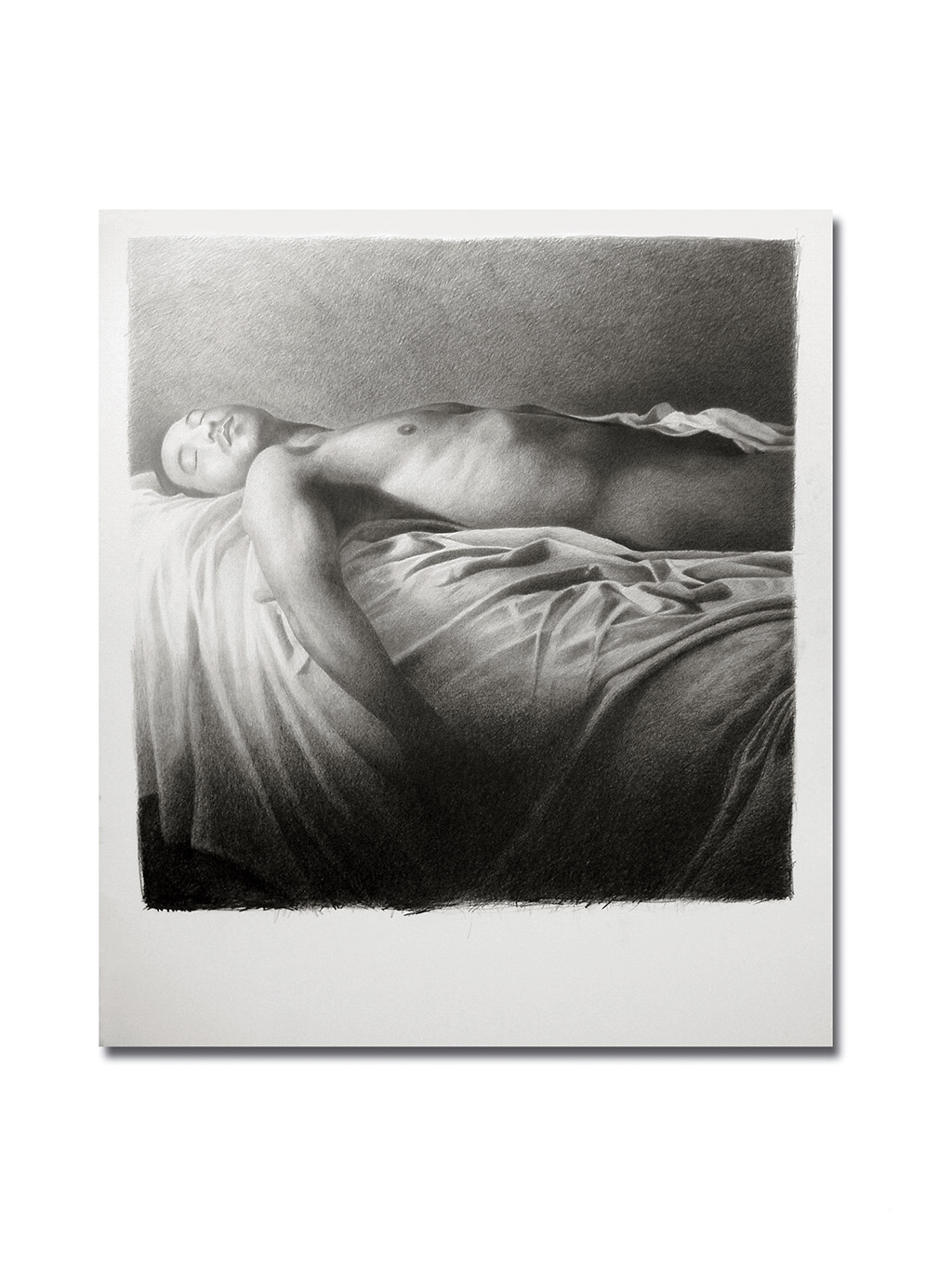 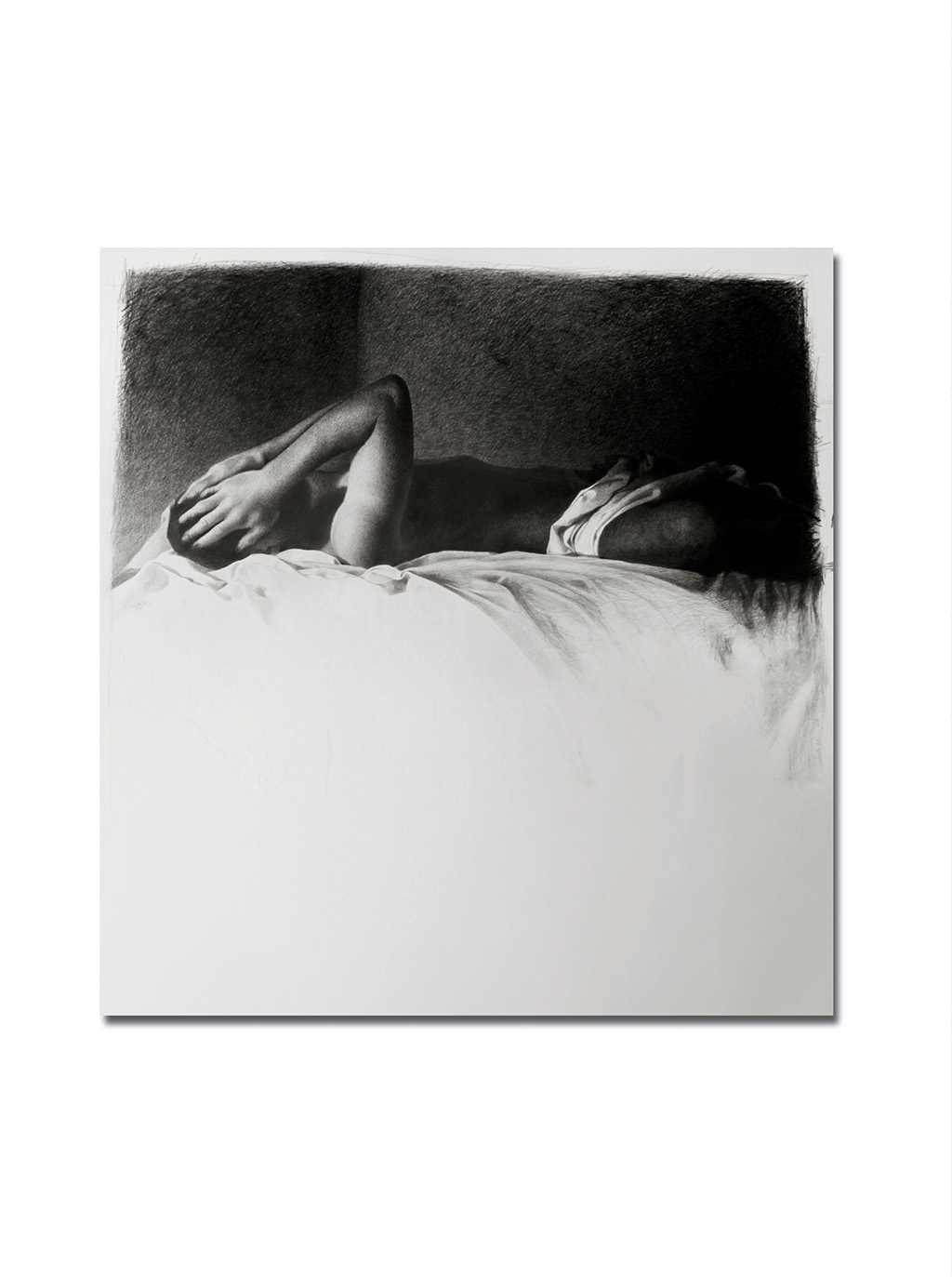 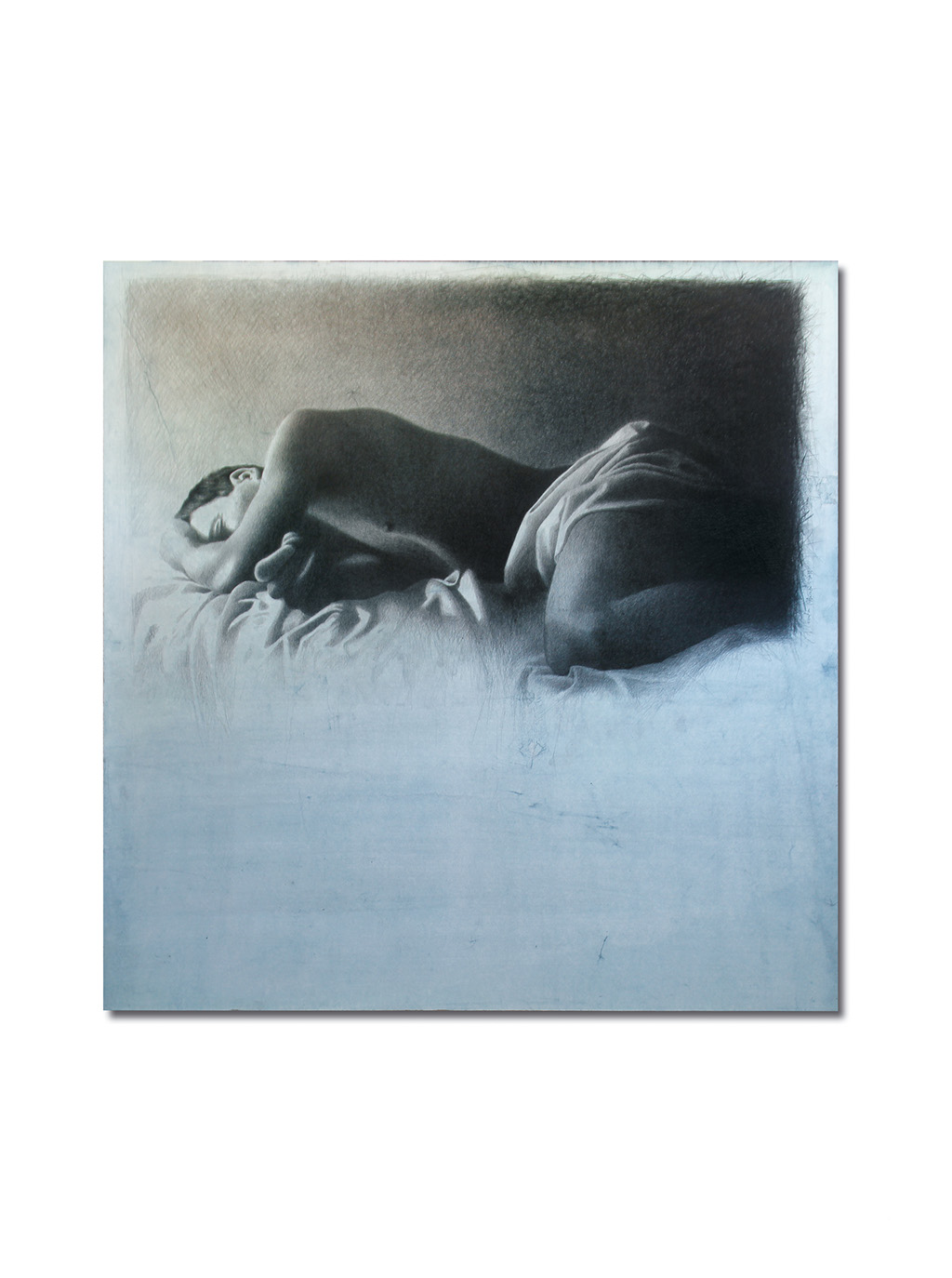 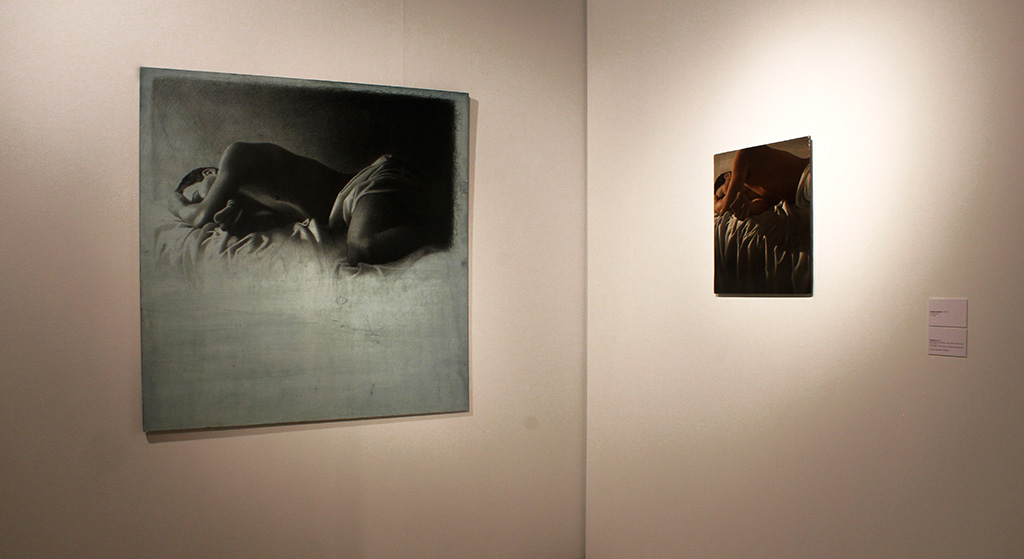 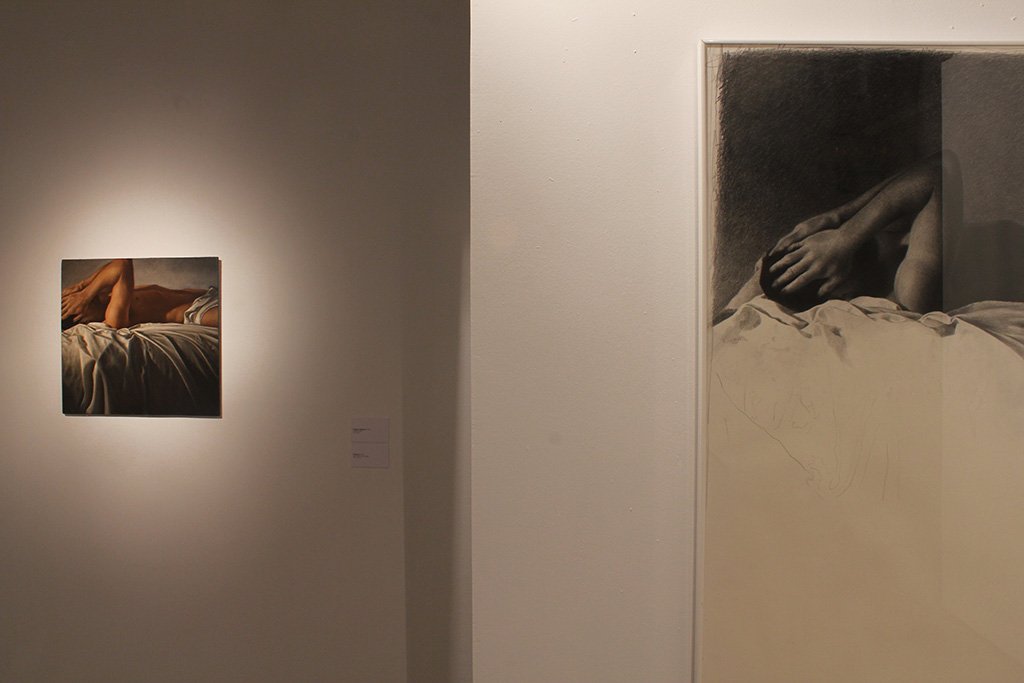 Marta Blasco’s work cannot be classified without using the term Realism. Which is an old term, discussed many a time, wished-for and often also discarded. For centuries, artists in the spheres of the visual arts, poetry and theology – but also religions – have argued about it. Thou shalt not make unto thee any graven image, Realism is not art, abstract art withdraws from the world or alienates man from it and so on.

Today, we understand Realism not just as the stale Naturalism of the trompe l’oeil, meaning the Naturalism of optical illusion. Nor do we mean Idealisation, which beautifies what we see, for example in the portraits of rulers. Today, Realism is not a question of style, but a critical method used to question the world artistically. The reality of this world is not just the one we see, meaning the god-given world. Our inner worlds are an inseparable part of it and they can only be seen if someone depicts them.

If we look at the paintings by Marta Blasco, it is fairly clear which questioning criteria she does not apply. Blasco does not tell a story, she is not looking for narrative elements. She rejects narrative painting. She concentrates on people on their own. They are often only visible as a torso. They do not move. They are at rest. Other than sleeping, lying, walking, standing or dying, they do not act as figures responsible for a dramatic action. They are all centred in themselves. They cannot be troubled. But they can still cause an inner unease in the observer. Because he will project his own experience of life and these special situations onto these paintings. Nothing is happening, could be the motto of these paintings. This is true for the paintings, but not for the observer. His room to manoeuvre widens, because the depictions are not perfect reflections, because the artist only lets details speak. She is working towards a timeless image of man. Nowhere can anything be found that is not beautiful, the ugly has no place here. The people depicted are beautiful in themselves, in and through the painting.

This goes hand in hand with a combination of different techniques. Oil paintings, drawings, video and graphic arts. Over the last few years, Blasco has especially combined drawings, paintings and video. Within this new trio, a level of narrative is created which cannot be found in the individual pieces. The individual paintings are calm, timeless, retreating into their own depth. By combining them a sequence is created when reading the paintings, within the observer a chronology of understanding is created which can be understood as a hidden plot. As the paintings are iconographically loaded, the viewer can fill them with his own interpretations and burst out of the seemingly narrow realistic framework of the paintings. She used a similar process in her work papeles rotos (torn papers). The destruction and re-ordering of a former unit lets the observer take a narrative view.

The work Ascención consists of a drawing together with a video filmed while the drawing was being completed. It explains the working process that gives the calming influence of the drawing after its completion a story: the one of its creation. The title of this work can be interpreted in a very banal way: a woman walks up the steps of a staircase without any protecting banisters, perhaps an everyday event. Ascención can also mean an ascent to a throne in politics or ascension to heaven in the religious sense. But this woman is not climbing Jacob’s ladder, she is not in search of eternal heaven. No hope-filled sign is showing her the right way. A gleaming white dress carries her long black hair up into the darkness, into negation, into death, into hell? The theme is well known from religious paintings. And in modern times it is a plot that is depicted frequently, although completely taken out of its religious context. Marcel Duchamp with his “Nude Descending a Staircase, No.2”, 1912 (Philadelphia Museum of Art) marks the beginning of a long series of paintings on this theme. Based on this cubistic farewell to painting, Gerhard Richter for example creates the social painting “Ema. (Nude on a staircase)” 1966, (Museum Ludwig, Cologne). Blasco knows this tradition and shatters it. But she is not in search of lost time (Marcel Proust). She confronts the lost time with paintings of timelessness, full of present and future. She turns her back on the iconography. She defines it anew. Her act is a woman in clothes. She does not come down, but goes up. Her figure is leaving us. Duchamp’s and Richter’s women are arriving where we are. She manages to upset our logically-trained way of looking at things. We become insecure and are surprised by the energies hidden behind this rather calm art.

This package of techniques can also be observed in her Corpus paintings and in the works entitled Ophelia. The theme of the drowned woman is a familiar one. But here, as with Judith, the classical, drama-oriented iconography is disturbed. Neither is the Ophelia tradition of beautiful water lilies picked up here. Here again, Blasco works with reduction, with the human torso. The drawing and the two oil paintings complement one another. Traditional opaque white with toxic lead is used in these pictures and it guarantees this inner glow. At the same time, the two paintings stand in contrast to the calmness of the drawing. The video, which Blasco likes to set to music, adds a rhythm to what we see and carries its mood along, showing the creative process of the drawing backwards. The picture gradually disappears until in the end all we see is the blank paper. This process corresponds to a perception of paintings, where although people and faces are shown, they do not look back at the observer. In representing its subject, it withdraws and goes back into its pure state. The viewer has to work out the eye contact for himself. The image itself remains reserved and mysterious.

The block of work entitled Corpus, which intrudes into the Ophelia pictures, reveals in its very title the tradition of corpus in art. There is nothing particularly world-shattering here in terms of religion, life or the history of painting. But Corpus 2 reminds us of the The Death of Marat by Jacques-Louis David, 1793 (Royal Museums of Fine Arts of Belgium, Brussels) or of the corpses laid out in innumerable religious paintings. But Blasco does not try to find her way through paraphrasing. It has to be said though, that the paintings are just everyday records of a sleeping man, again shown as a torso. However, Blasco does not choose the classical torso of antiquity as an ideal of beauty, like the typical standing man without arms for example. The person portrayed is placed high up. He is lying in the upper half of the picture, as if lifted onto a pedestal by the bedding. Contrasts of dark and light are used in different ways. The technique of using charcoal and graphite allows not only unexpected picture depth but also wonderful hints, like the corner of a room (Corpus 2), an inexplicable inner lighting of the picture (Corpus 1) or a scarcely-defined back wall (Corpus 3). Moreover, the size of Corpus 1 is much larger than life. The drawings are evidence of an exact study of reality and also of the artist’s imagination, which allows her to create something in an even more realistic way than she might have seen it, for example the sophisticated play of folds on the bed cover, which are made to stand out more sharply than the body, rendering it more mysterious. The drawings do not hide anything and yet they are caught in their own world.

The three drawings are of different sizes. While in their content they form a triptych, they can only be shown side by side due to their form. But their unity is present straight away. It would be difficult to construct an action from the sequence of 1, 2, 3. But the observer tries to find a sequence within the sleeping person so that he can come up with some narrative. Comparing them, questions come up like: is it the same room, the same person? As Marcel Proust said in his work In Search of Lost Time (volume one of Swann’s Way, “Combray” section): “When a man is asleep, he has in a circle around him the chain of hours, the sequence of the years, the order of the heavenly host.” In the Corpus pictures as well, in this triptych of sleep, a kind of timelessness prevails which stands in opposition to the system of order. Here again, the shapes of the diptych or triptych show Marta Blasco’s critical approach to the traditional shapes of paintings.

Marta Blasco has applied the critical method Realism uses to deal with reality to create extremely powerful pictures. One might talk about existential works that open up an inner world, very personal on the one hand, but displaying a naturally public aspect on the other. Internationally, Blasco forms part of a generation which rejects abstract art. Our society can no longer guarantee a happy, ordered life. More than ever before in peacetime, the individual is worried; his plans for life, his hopes are being more and more restricted. Blasco shows this narrowing of options in her calm yet mysterious pictures. Despite her discretion, the pictures have a kind of appeal. She does not fit into the group of Spanish artists just after the time of Franco with their realistic paintings and many optical illusions. She cannot be compared with the Leipzig School of Art either. In this German representation of reality, historical realities are told through exaggeration and slightly surrealistic expressiveness. Blasco is not looking for a debate with photography as a challenge for precision and detail. Strangely enough, the only realistic technique she uses is video, which nonetheless always shows a process of a changing artistic reality, but never the reality outside the painting. Blasco avoids comparisons. Her thoughts are radically centred in art. Her pictures do not show the beautified figures of a mysterious tale like the ones we know from the artistic style of Balthus.

Blasco goes her own way, which is sometimes crossed by other considerations. She always remains within the world of her own pictures. Her representations are shortened, she does not show all the possibilities. In many steps, never in bright colour, she shows a psychologising world view. Her pictures are up to date, but at the same time, they have sneaked out of time. They are timeless. They unsettle through their apparent precision, which nevertheless cannot be seen in any voyeuristic sense. Showing facts is here combined with emotional criticism, experience and hope. The observer is always encouraged to follow her thoughts, to use his eyes in a positive sense. Entertainment value does not figure in the balance. Blasco makes it more difficult for the observer than he himself thinks at first glance. This is how she establishes the slowness and at the same time the longevity of her pictures. The are not conceived as a sheer pleasure to the eye for entertainment. They are intensive companions for life.